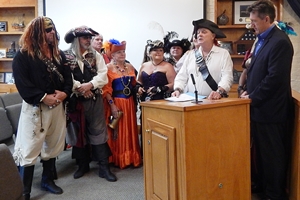 WHEREAS, in case you didn’t realize it, Fernandina Beach is rich in pirate history. Thus, it was only a matter of time before the Fernandian Pirate Club, Inc. would create an Annual Festival.There’s not much time to refresh your knowledg of pirate lingo before everyone in town is blathering about grog like scurby bilge rats; and

WHEREAS, Fernandina Beach was all about pirates long before pirates were cool, in fact, it’s hard to find a more pirate-friendly destination. The fernandina Pirate Club has been entertaining crowds and promoting the Isle of Eight Flags Shrimp Festival, Fernandina Beach, and Nassau County since 1973; and

WHEREAS, the Fernandina Pirate Club is 69 members strong. This lively and active organization is involved with numerous charitable civic projects and even sponsors their very own scholarship contests. Member also sepen a fair amount of time strolling Fernandina’s downtown business district on weekend afternoons, handing out beads and spouting, “Aye!” and other authentic pirate greetings.

NOW, THEREFORE, I, Edward E. Boner, by virtue of the authority vested in me as Mayor of the City of Fernandina Beach, Florida, do hereby encourage the citizens of Fernandina Beach to participate in the festivities prclaiming October 9 – 11, 2015 as the:

IN WITNESS WHEREOF, I hereunto set my hand and caused the Official Seal of the City of Fernandina Beach, Florida to be affixed this 20th day of October, 1015.