The history of Amelia Island, here in northeast Florida, included pirates and smuggling. Our natural deep water harbor made it convenient for large ships to come to the Port of Fernandina.

At certain points in history, as many as 300 ships per day would bring in silk, tobacco, weapons, and other products to be smuggled up the St. Mary’s River. Legal cargo was also transported including lumber, cotton, sugar cane and rice. This made Amelia Island an attractive port to lay claim for several different countries.

Pirating has a colorful past here on the Island of Eight Flags, and along with the wide-eyed tales of buried treasure there also comes a bit of fascinating history regard a few notorious Pirates like Luis Aury, Captain Kidd, and Jean Lafitte.

Each year the Pirates invade Fernandina Beach during the Isle of Eight Flags Shrimp Festival and we hope you enjoy this video captured during the 2016 event of Pirates delivering a brief history lesson of the eight flags that have flown over Amelia Island. 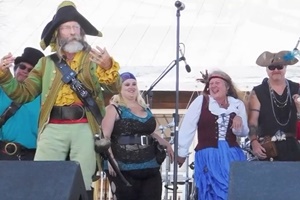