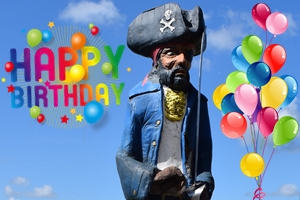 The enchanting Victorian seaport village of Fernandina Beach is full of rich history, eclectic shops and restaurants, and amazing architecture, but it was once a stomping ground for pirates, too, and on October 6, 2018, the community is coming together to celebrate Peg Leg Pete’s 40th Birthday!

Originally carved from a single ten foot piece of live oak by artist Wayne Ervin, a community-wide contest to name the statue was won by the students of Emma Love Hardee Elementary. Officially named Peg Leg, the wooden sculpture has stood proudly as a symbol of fellowship in downtown Fernandina Beach since October 14, 1978. Pete, as Peg Leg became fondly known, is reported to be the single most photographed icon in Fernandina Beach, Florida.

Hosted by Fernandina Beach Main Street, Peg Leg Pete’s 40th Birthday Party will be held Saturday, October 6, 2018, at the Welcome Center located at the foot of Centre Street beginning at 1:00 p.m. with the reading of the Proclamation of Pirate Peg Leg Pete’s birthday followed by Actress and Historian Thea Seagraves telling the story of Peg Leg Pete. There will be family friendly vendors, a coloring contest, music, toy demonstrations, face painting, the Fernandina Pirates Club’s popular parade float, and of course – birthday cake.

The Nassau Community Band will be performing at 1:15 and again at 2:15, story telling by Jenna the Mermaid will be at 2:00 p.m., and at 3:00 members of the Pirate’s Club will be holding Pirate School for the youngsters who want to learn how to become a pirate. Musician Lucas Merren will perform leading up to the official cutting of the birthday cake at 4:00 p.m. before the festivities come to a close with raffle drawings and the award presentation to announce the winner of the coloring contest as judged by Pirates!