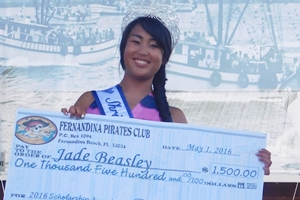 The spray of the sea, the warmth of the breeze, the freedom of the open waters. The life of a pirate has been written about, sung about, and dreamed about for decades. The appeal is understandable. A pirate has the liberty to travel wherever he wants, to do whatever he pleases, and to seek whatever adventure he desires. He fearlessly sails the high seas, never quaking at the dangers of his conquest. He looks squarely into the face of social stigmas, institutions, and expectations, and refuses to conform to any system. His tenacity, shaped by the rigor of his work and the courage of his heart, is endless. A good pirate will cling to this legacy until his dying day.

A particular ancestor of mine, who happens to be one of the most powerful and ruthless pirates of all time, is not exception. This piraqte did not fit the stereotype of a weathered, bearded man with an unquenchable thirst for rum and an unmatched string of women at every port. In other words, my pirate ancestor was no Jack Sparrow. She was, like me, a Chinese woman. Tucked away in the dusty pates of pirate history is Ching Shih, commander of the Red Flag Fleet – one of the most renowned bands of pirates the world has ever seen. This image of a woman pirate leading a mass of fierce men in the waters of the China Sea obviously strays from the normal caricature of a pirate. Nevertheless, Ching lived out the legacy of a true pirate arguably better than any man. She had a tough hand, a calculating mind, and a resolute heart. The strength of this lady pirate was unshakable.

Ching dove into the world of pirates at the age of sixteen, when she married Pirate Captain Zheng Yi in 1801. A former prostitute, Ching should never have amounted to much (Annbonnypirate). Had she remained a prostitute, her life likely would have been forgotten – lost in the pages of history. But Ching resister her apparent destiny. Taking the reins to her own life, she broke course from its dead end path. Her new husband, who was born into a prosperous family of pirates, succeeded in uniting every major Chines pirate fleet into one organization – the Red Flag Fleet (Annbonnypirate). When Captain Zheng Yi died in a battle in 1807, Ching saw her chance to accomplish what no Chinese woman had ever achieved (Szczepanski). She seized control of the Red Flag Fleet, effectively sliding herself into her husband’s position. She began by immediately marrying her deceased husband’s first mate, keeping her place at the helm of the operation (Koerth). According to legend, Ching arose after her husband’s death and declared to the pirate captains who had begun to scatter like rates, “Under the leadership of a man you have all chosen to flee. We shall see how you prove yourselves under the hand of a woman.” (rejectedprincesses). A woman – a former prostitute – was now commanding one of the most fearsome pirate armadas of all time.

Under her rule, the Red Flag Fleet grew exponentially in power and wealth. Ching governed her crew with an iron fist, not hesitating to execute pirates who fell out of line. This ensured her the final word in every decision. Not a single piece of gold eluded her scrutinizing gaze, for she was the ultimate authority on the distribution of wealth after every raid. her crew, however, had no reason to complain, for they were rolling in riches. Due to the immense power Ching gained for the Red Flags, they had the strength to plunder every town and ship in their path. The sailed confidently between Macao and Canton, exhausting the Chinese coastline of its wealth and resources (Annbonnypirate). At the mention of Ching and her fleet of roughly 80,000 pirates, even the world’s most prominent military forces shook in their boots. Stories circulated about her merciless brutality – had she really nailed a man to the deck of her ship and beaten him senseless (Pygas)? Did she really cut off the ears of a disobedient crew members (rejectedprincesses)? Ching was a paradox to all female stereotypes of her time. Respected by the men she led and feared by the men she hated, she fiercely defied all constraints placed upon her by society, thus carrying the legacy of all true pirates.

Surprisingly, Ching did have a compassionate side. Likely stemming from the lack of respect she received in her former life as a prostitute, she had a soft spot for women. Any pirate in her fleet who desired to ‘keep’ one of the captured women was required to marry her. Of course, Ching’s laws protecting captured women were still as sharp as she was. Decapitation was the punishment for the ill-advised fool with the audacity to cheat on his new wife or the stupidity to never marry her in the first place (rejected princesses). Clearly, the threat of beheading not only served as a shield against the mistreatment of women, but it also gave the crew a stark reminder as to who was in charge. Ching’s power was so great that none dared to cross her – especially when it came to woman.

Even the Chinese government was no match for Ching. It spent years tirelessly hunting her, yet is still could not defeat her. The Chinese Navy eventually resorted to seeking the help of British and Portuguese bounty hunters to bring an end to her reign of terror – but to no avail (Koerth). In one failed attempt to defeat Ching in 1809, the Chinese bombarded her with “suicide boats” filled with straw and explosives. In response, Ching’s pirates promptly extinguished the flames and incorporated the ships into their armada. Even a fiery fleet of ships set ablze by the join efforts of the Chinese and Portuguese governments could not bring down the great Ching Shih (rejectedprincesses).

In the end, Ching emerged the ultimate victor. Conceding to the fact that Ching was impossible to defeat, the Chinese government finally offered the Red Flag Fleet amnesty in 1810 if they agreed to stop their tyrannical oppression of the Chinese waters. Ching and the majority of her army were allowed to bring their ships to port with no criminal prosecution, and could even keep all the riches they had stolen (Koerth). This outcome directly contradicts the stereotype of a pirate who is always on the run from the law, for rarely do pirates successfully broker a profitable deal and climb out from under the fear of arrest. After her retirement, Ching lived out the rest of her days as a successful business owner and grandmother, dying in 1844 at the age of 69 (Koerth). Ching Shih, with her clever wits and her refusal to give up, showed herself to be an exceptional adversary and an extraordinary pirate – whether she was shooting enemies from the deck of a ship, negotiating a government deal, or running a prosperous gambling business.

Although possibly not the most morally acceptable, the amazing accomplishments of my Chinese pirate ancestor are undeniably admirable. She is a role model to me because my own life mirrors her passion to overcome challenges and stereotypes. As a baby, I was given the Chinese name, “Zhi”, which means “strong willed”. Throughout my life, I have proven time and time again that this name accurately describes my fierce resolve. One of my dreams is to become a Coast Guard Rescue Swimmer – a highly unprecedented, difficult, and daunting task. But because I, like Ching, possess the determination of a pirate, I know that I will succeed in the lofty goals I set for myself. A true pirate confidently sails the seven seas of life, boldly seeking new adventures. She does not fear the mysteries that lie beyond the horizon, nor does she back down for the battles before her. Like Ching Shih, a true pirate does not cower in the bondage of society’s expectations. The legacy of a true pirate is bravely stepping foot into the unknown, living life with a sense of purpose, and crashing through whatever obstacles necessary to achieve her dreams. Following the example of my ancestor Ching Shih, I know I will attack life with this same courageous spirit. For, after all, I too have the heart of a true pirate.

Jade Beasley was the winner of our 2016 Pirate Scholarship Essay Contest and won $1,500.00 to apply to her college expenses in the fall.