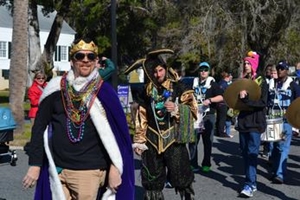 The February 6, 2016 Mardi Gras Festival will follow a sports theme to coincide with Super Bowl Weekend. The “Thrill of Victory” theme will be followed throughout parade floats and costumes and even the evening’s formal ball. Coastal Georgia is rich in tradition and downtown St. Marys’ annual Mardi Gras Festival is a favorite event for tourists. The day features all family-friendly activities beginning with a 7 a.m. charity fun run hosted by Camden County High Schools DECA and HERO Club’s.

Other festival events continue from 9 a.m. to 5 p.m. and include the 10 a.m. parade and vendors offering arts, crafts, food and activities. Angela Wigger, tourism director, stated “It’s a day of great food and guaranteed fun in the historic district.” A variety of performances and demonstrations will occur throughout the day at the main stage and the St. Marys Waterfront Park and when the sun goes down, an adults-only celebration begins at the annual Mardi Gras Ball.

The Mardi Gras Ball will be held from 6:30 p.m. through midnight at Chaser’s at J’s British Pub. The adults-only party includes a buffet dinner, entertainment and dancing. Attire is a “Thrill of Victory” themed costume or formal wear. There will be a costume contest where prizes will be awarded for the most creative outfits that hold true to the theme. Mardi Gras would not be complete without the traditional announcement of the new King and Queen. This Monarch of Merriment and Queen of the Carnival will hold court by representing the St. Marys Mardi Gras Festival at functions over the coming year. The privilege of being selected as St. Marys royalty occurs by being the person who finds the King Cakes trinkets in their dessert. Another honor announced during the evening is the Rosie Kelley Community Service award winner. The accolade recognizes outstanding community service to St. Marys. Tickets are $40 per person and can be purchased with cash or check at Once Upon A Bookseller.

The festival is presented by the St. Marys Downtown Merchants Association whose president, Doug Vaught, said “The festival has, again, been selected as a Southeast Tourism Society Top 20 Event. It promises to be a day that positively benefits the economy in St. Marys.”

For vendor or parade applications or ball tickets contact Once Upon A Bookseller at 912-882-7350. For
accommodation options or other information contact the St. Marys Welcome Center at 912-882-4000 or go to VisitStMarys.com.